”The dairy industry used to get a free pass, even from many animal rights campaigners. But with the mainstream emergence of veganism, more people are becoming aware of practices that are normal in milk production. Phoenix linked the oppression of animals with the oppression of humans. The “cries of anguish” from mother cows are finally being heard.”

All of that makes me really sad, because it shows that people didn’t listen at all to what he said. The Guardian is one of few who has reported about Phoenix speech in a postive way. Hats off!

But why do people become so angry at Phoenix? I think it has to do with defense mechanism. Because you see, the civil human rights movement is very connected. So many people who are feminist, are also against racism and believe that love is love, fights against poverty etc. But. Even today, many few, are vegan.

So what happens is that when Joaquin mentions all of that, in the same sentence as animal rights, these people suddenly feel less ”good”, and feel the need to defend themselves. Maybe they even felt attacked, because suddenly, they are the abuser and not the liberator?

If they would have just listened well, they would have understood that all injustice is connected. Like Dr Martin Luther King said ”Injustice anywhere, is a threat to justice everywhere”. Any threat to any animal or normalization of cruelty against them, is an indirect threat to humans because it is very likley to transfer those injust and awful values to humans. When you make a life and death distinguishment between a dog and a cow (the fact that you are okay with that cows are systematically murdered and raped, while your dog is a reciver of all love in the world), a seed of discrimination exsits within you. When that seed exsits and is normalized in the society, it can and will sooner or later bloomsom to other discriminations: like racism, sexism, homofobia, xenofobia, if somebody just water it enough and make sure it has sunshine…

I believe that it is impossible to have a society that respects women, where there is no discrimination of color or who you love, if we continue to behave like we do towards the animals. A society of cero discrimination is obviously not possible, but including animal rights and giving back their freedom that we have robbed them is necessary if we are going to create a society as equal as possible.

I think it was brilliant of Phoenix to mention the cow and the dairy industry, because that whole industry symbolizes acts that we humans today usually oppose, especially when it comes to humans: slavery, rape (force insamination), abuse of the female reproduction system, seperation of mother and children, infanticide (the boy calfs are killed immediatley), sexual abuse of underage individuals (the girl calfs starts to get exploited at 15 months of age, and remember cows live aproximatley 20 years when they are free…), murder (when they are not profitable anymore, they get sent to the slaughterhouse), poor living conditions (they live in their own poop, with no space) etc etc…

The point is, acknowleding the animals and their suffering, won’t take attention from the goal that you might be working for. And it does not diminish or overshadow any other social justice movement. Actually, it is a way to combat the other problems, but from the root and not just from the surface. 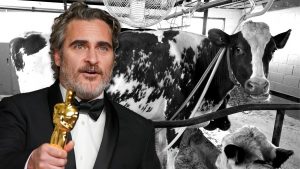